Not Cycling, Still Having Fun 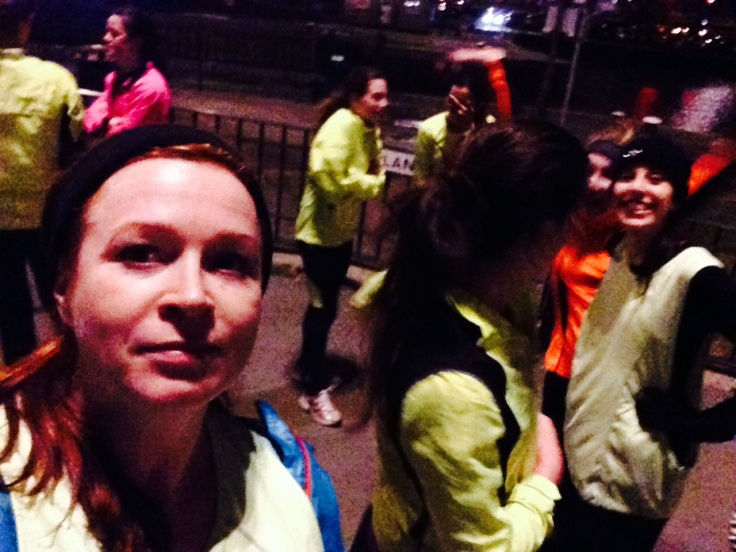 This week, due to having the builders in, I had to relocate to my friend’s house in Bristol. This was great in lots of ways; it’s nice to hang out with her, I like spending time with her, her house is a lot closer to my work at Bristol University, and frankly Bristol is a pretty cool city.

On the downside, I couldn’t bring my bike, and there’s no Virgin Active (my gym) anywhere near. So that meant no cycling for me for a whole week, which isn’t just not great in terms of training, it’s also a bit sad for me. I love riding my bike! Happily, I tried my hand at two other sports, and completely loved them!

First up was running. I’ve done a little bit of running over the last few months, and by little bit I mean I’ve once or twice gone for a jog up the seafront in Weston Super Mare. Marathon running it ain’t.

To be honest, I hadn’t really planned to go running this week at all. I’d bought my sports kit stuff with me to Bristol, thinking I might try and find a class somewhere, and I’d popped into a branch of sportswear chain Sweaty Betty which is just down the road from my work as I remembered they offered lunchtime Yoga and Pilates sessions. On the class schedule, I spotted that on Tuesdays after work there was a 1-hour run group.

Now, I’ve never run in a group before. I’ve never joined a running club. The very thought is a little scary. But the weather was bright and sunny and that always makes me feel like doing something active. I was filled with the spirit of carpe diem. I thought what the hell, and at 5.45pm I put on my shoes and leggings, and headed to the shop.

Inside there stood a cluster of women. Some clearly went regularly, but there were one or two of us who were new. The women leading us were friendly and reassuring, and off we headed en masse into the Bristol dusk, down the hill, and along the riverside out to the Clifton Suspension Bridge.

On the general running bit I was okay, actually. Slow, yes, but not dying. I was quite surprised at myself, actually. Then came the difficult bit. A one mile timed section, with the idea being that by pushing a bit harder here, you could establish your general pace. This is then useful for gauging your progress – so long as you keep up the running, of course.

I managed the mile, then the last 50 meters or so the lady running with me said ‘last bit, go for it!’ and for some reason, god knows why, I sprinted for it. Actually, while I was running with the rest of the group cheering me in, I felt pretty good. As soon as I stopped, I thought I was going to cough my guts up. I suspect I am not quite ready for that level of running exertion yet. I just about managed to ‘run’ very very slowly back up the hill to the shop, though there were pedestrians walking faster than me uphill. But I did it without stopping, and afterwards I felt bloody fantastic!

Would I do it again? Yes, definitely! The group were lovely, really friendly and supportive, and that’s a big encouragement. I doubt I’d have had the willpower to run for as long or push myself as much as I did if I’d been running on my own. I’d like to get good at running, as I love the idea of just heading out the door and running out in the countryside. So I’m going to try and keep it going.

I think Sweaty Betty are on to a clever strategy with these running clubs, and lunch time sessions. It makes the shop the hub of a fitness community, and of course you are in and out past the beautiful (but rather pricy) kit on a regular basis. It taps into that social side of sport that I know I like, and that I suspect works well for a lot of women.

You Gotta Roll With It

After emerging with surprisingly few aches from my running experience on Tuesday, on Thursday I decided to try something I’ve wanted to do for years. Roller Derby!

Okay, so I wasn’t actually going to be trying roller derby itself as I’m not a very good skater, and I’m not on a team. But Bristol Roller Derby have a ‘drop in derby’ session on Thursday nights that’s for people who want to learn how to skate, practice roller derby skills, or just have a bit of a play around on eight wheels.

I’ve had a number of friends who’ve got into Roller Derby over the years. One friend rode with the Brighton Roller Girls, another with the Seaside Sirens Roller Girls in Essex. I’ve been to watch loads of matches, and I love the atmosphere and the excitement of the game itself. It’s always seemed a challenging but fun sport that requires a hell of a lot of skill, and a sport that’s never been preoccupied with the size, shape, persuasion or anything else of those who participate.

One mate was even featured in a roller derby documentary, Roller Derby ‘Till I Die, which covered her time in the Rec League of the London Roller Girls. Incidentally, apparently there’s a tiny bit of me in the episode that’s about her, but I haven’t seen it yet sadly.

So anyway, I never had time to get involved or even really learn to skate while I was in London. What the hell, might as well as do it now!

I was completely rubbish to start with. I used to be able to skate more or less competently in a forward direction, and t-stop, but I’ve forgotten all of that! We did a few drills, including skating round in a close line taking turns moving up the line by skating in and out of the skaters in front. This was kinda terrifying as I was not feeling very stable on skates, but it’s amazing how having a task to focus on makes you skate better when you aren’t just thinking about what your feet are doing.

In short, I loved it and will be back at it next week, though in the meantime I need to do some skating on the seafront at Weston. It’ll be a long time (if ever!) that I’m skating competently enough to do Roller Derby, but it was such a lot of fun, the people there were lovely, and bloody hell what a workout!

And the genius thing about both these activities is that they’ll make my legs stronger, which will benefit my cycling.

One thought on “Not Cycling, Still Having Fun”